The Noyce STEM Educator Scholarship and Noyce STEM Educator Stipend are made possible through the generous support of the National Science Foundation. Its goal is to help recruit, prepare, place, and mentor excellent STEM educators in high needs schools in Joliet and the surrounding communities.

Are YOU seeking a Bachelor’s degree in math or science with secondary education?

About the Noyce STEM Educator Scholarship

*Applicants can complete the first two years of their degree program either at USF, a community college or other accredited institution. Transfer students must have applied for admission to the university at the time the application is submitted, and must be admitted to USF to be eligible for the scholarship.

Special consideration given to first-generation college students and groups underrepresented in STEM fields.

Noyce Scholarship recipients are required to teach in a high needs school for a minimum of four (4) years following graduation.

Do YOU already have a degree in a STEM field and want to earn a teaching license?

About the Noyce STEM Educator Stipend

Noyce Stipend recipients are required to teach in a high need school for a minimum of two (2) years following graduation. Scholars are selected based on qualities that indicate their potential to become exemplary teachers.

Special consideration given to applicants of groups underrepresented in STEM fields

Noyce Stipend recipients are required to teach in a high need school for a minimum of two (2) years following graduation.

Module 3 Solving Quadratic Equations: This Module helps students to explore the process of solving quadratic equations. Students will use mathematical modeling and reasoning to make connections to solving systems of equations. Students will complete various activities from watching Youtube videos to completing Google Docs and FlipGrids explaining their rationale. Students will also read articles to analyze applications of solving systems of equations and follow along with Khan Academy and Emaze presentations.

Module 1 Systems of Equations: This module helps students to explore the different methods of solving systems. It includes solving systems by graphing, elimination, substitution and matrices. The module also integrates the use of technology by introducing the online graphing software Geogebra. Students will be able to explore the software through a Geogebra webquest as well as an assessment. The assessment  will test the students ability on their understanding of the different methods and allow them to create connections to the specific content and real word applications.

Module 2 Solving Equations: This module consists of lessons that involve solving equations. The lessons allow students to be able to build and manipulate equations to reach common answers. The module also provides a sneak peek into Physics allowing students to apply their understanding behind rearranging and solving their equations. Lessons include openers where students build upon their background knowledge and closures to have a formative assessment on each of the lessons. Included in the module is a interactive Jeopardy review games where students can be grouped together to gain the most points!

The two modules contain lessons on Solving Systems of Equations and Solving Equations. Each module contains days of instruction as well as homework problems. The first module contains a Geogebra assessment and the second includes a Jeopardy game. Both units can be accessed here.

Evolution: students will learn about descent with modification, evidence for evolution, and natural selection.

How Organisms Grow & Develop: students will learn about the cell cycle, structure of DNA, DNA replication, and mitosis.

Gene Expression: students will learn how our DNA encodes for our characteristics, specifically through the steps of transcription and translation.

Module 1 Surface Area, Volume, and Density: Students review and learn surface area, volume, and density over three days. The remaining two days will be used for the students to explore the topics with hands-on material.

Module 2 Slope and Technology: Students review and learn points/lines, slope formula, slope-intercept form, and standard form. over four days. Day five will be an accumulation of everything learned where students will use GeoGebra, an assistive technology tool, to graph linear models they create and will represent the linear model in both slope-intercept and standard form.

Module 1 Newton’s Second Law: The first module focuses on HS-PS2 1: Analyze data to support the claim that Newton’s second law of motion describes the mathematical relationship among the net force on a macroscopic object, its mass, and its acceleration. This is done through a Lecture on Newton’s Laws of Motion, a Discovery Activity, a Lecture of Force Diagrams, and a Guided Inquiry Activity. The cumulation of these resources provide the students with opportunities to explore Newton’s Second Law of Motion and understand the mathematical relationships between Mass, Acceleration, and Force.

Module 2 Gravity and Coulonb’s Law: The second module utilizes HS-PS2 4: Use mathematical representations of Newton’s Law of Gravitation and Coulomb’s Law to describe and predict the gravitational and electrostatic forces between an object. The students will learn the material through Lectures, Discovery Activities, Guided Inquiry Activities, Technology Laboratories, and a Laboratory. The importance of being able to predict the forces between objects via Newton’s Law of Gravitation or Coulomb’s Law of Electrostatic Forces will be assessed through primarily technology based activities. This allows the students to explore these forces on the appropriate scales and provides an interactive activity for in the classroom or at home.

Module 3 Momentum: The third module focuses on HS-PS2 2: Use mathematical representations to support the claim that the total momentum of a system of objects is conserved where there is no net force on the system. The students will be provided with a Lecture, a Discovery Activity, a Technology Laboratory, and a Open or Guided Inquiry Activity. The Lecure, Discovery Activity, and Technology Laboratory are tools that provide the students with the skills to complete the Open or Guided Inquiry Activity. This Activity is a three day long assessment of Baseball and Softball to find out which sport is “harder” based in Physics terms. In the Activity the students will be able to use mathematical representations to explain the momentum of a no net force system.

Module 4 Motion, Gravity, and Momentum: The fourth and final module is a collimation of module one, three, and HS-PS2 3: Apply science and engineering ideas to design, evaluate, and refine a device that minimizes the force on a macroscopic object during a collision. The students are tasked with using their newly discovered physics skills to assess the quality of substances used in Crash Cushions that are used for safety on highways. This Open Inquiry Activity has the students design a ramp to test the speed of a moving object and the collision with four different materials. They are asked to figure out what material was best for the speed that they were going  at. This Activity provides a variety of answers based on the angle of the ramp that they make. The fourth module wraps up this unit with a fun and interactive Activity that can either be done at home or at school. 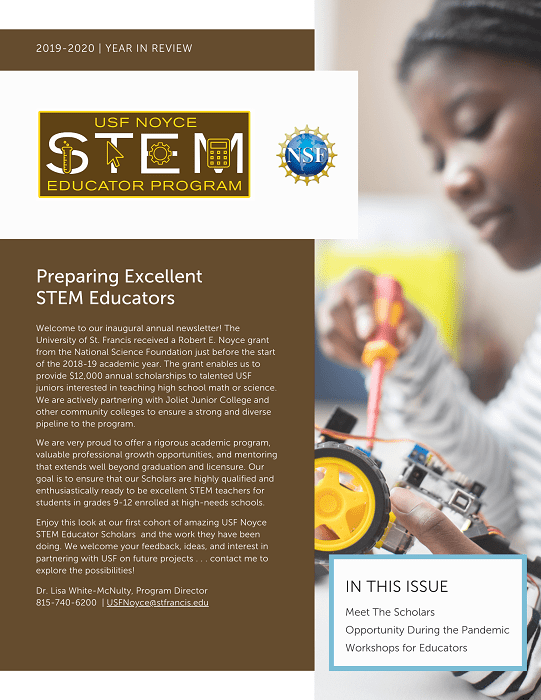 Like most institutions and schools, the University of St. Francis closed its campus in March in response to the COVID-19 pandemic. As a result, several STEM Service Learning projects scheduled for spring as well as the STEM camp planned for the summer were canceled.

Rather than throwing in the towel, the USF Noyce Team pivoted, with an eye toward helping teachers struggling with teaching STEM topics in a remote environment. Read the entire story (and much more) in our inaugural annual newsletter!