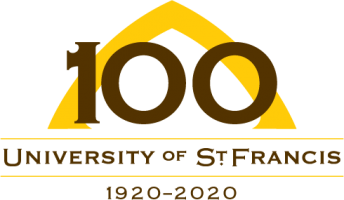 The University of St. Francis has come a long way since it was established in 1920. Founded by the Sisters of Saint Francis of Mary Immaculate, known as the Joliet Franciscans, the institution was first called “New College,” then “Assisi College,” followed by the “College of St. Francis,” and finally reaching university status in 1998.

The university has a rich history. Over the years, the institution transitioned from exclusively preparing the Sisters to teach, to becoming an all-women’s college, to becoming coeducational in 1971, to affiliating with the Saint Joseph College of Nursing in 1997. Throughout the years, it has maintained its focus on offering a Catholic, comprehensive educational experience, focused on Franciscan values and rooted in the liberal arts, to each and every student.

With over 50,000 alumni in 50 states and over 20 foreign countries, all of us at the University of St. Francis are excited to celebrate this milestone. As we celebrate our first 100 years, we renew our commitment to build a Franciscan future!

Building a Franciscan Future…Together, in Our Second Century!

“100 Years of Philanthropy” Donors Dinner
Thursday, November 5, 2020 | 6 p.m. | San Damiano Hall (Motherhouse)
A “by invitation” gathering of individuals who have supported the university during its first 100 years.

Ambassador Day
Thursday, November 12, 2020 | 8:30 a.m. | Virtual Event
A gathering of community business and governmental leaders and other friends of the university for a special Centennial address by USF president, Dr. Arvid C. Johnson.

EVENTS AWAITING RESCHEDULING DUE TO COVID-19

Celebration of the Century

An Oral History of USF

1865 – The Congregation of the Sisters of St Francis of Mary Immaculate established on August 2 by Mother Alfred Moes.

1912-1913 – A new academic wing on Taylor Street was added to Motherhouse to house the growing educational programs.

1915 – During construction, the curriculum of St. Francis Academy grew and SFA reopened in a new space in September, affording more separation between academy students and the Sisters.

1920 – The first college department formed as an extension of the academy by the Congregation of the Third Order of St. Francis of Mary Immaculate. The original 1874 charter from the State of Illinois was amended in 1920 to read, “The object of the Association shall be: to found, establish and maintain institutions of learning devoted to the education of young ladies, and divided into several departments or Colleges of Liberals Arts, Science, Philosophy, Literatures, Fine Arts, Music, Domestic Arts and Sciences, and the various commercial branches.” That same year, a nurses’ training school that, since 1911, had only educated Sisters was opened to the laity under the name “Saint Joseph School of Nursing”—a separate entity sponsored by the Franciscan Sisters of the Sacred Heart.

1922 – Sponsors built Tower Hall to provide additional space for the academy and to free up space in the Motherhouse for the growing college. A cornerstone ceremony was held on August 20 and a dedication of the completed structure was held on Octobter 14, 1923. On October 27, 1922, the first nursing class graduates with a total of 18 students (ten Sisters and eight laywomen).

1924 – Sr. Priscilla Sapp, OSF, R.N., Ed.D., a Franciscan Sister of the Sacred Heart, was appointed director of the School of Nursing—a position she held for over forty years.

1930 – A senior college curriculum was established, and a new name, the College of St. Francis (CSF), was adopted. CSF was given bachelor’s degree-granting authority.

1933 – The Alumni Association was formed.

1935 – A course affiliation program between CSF’s College of Nursing and the St. Joseph Hospital School of Nursing began.

1936 – Faculty member Dr. Frank Weberg instigated the Papal Peace Program and arranged for the Midwest International Peace Conference of the Catholic Association to be held on campus. Shortly after, the Red Cross depended on CSF for training preparedness and the college was later designated as a Civil Defense Shelter.

1938 – Accreditation recognition was received from the North Central Association of Colleges and Universities.

1943 – Two new Bachelor of Arts degrees in Spanish and Science were approved. The Cadet Nurse Training program instituted to prepare nurses to meet the needs imposed by World War II.

1944 – Art was announced as a major and cooperative program began with extension classes from DePaul and Loyola Universities.

1945 – An all female, student-run radio station, WCSF, began in 1945. Broadcasts were prepared by students and aired on Joliet’s local station, WJOL. “In 1976, WCSF was created to educate students in all aspect of running an FM radio station. It originally broadcast only to the dorms, but in 1988 it was licensed by the Federal Communications Commission (FCC) to air on 88.7 FM in the Joliet area.”

1946 – Temporary off-campus student housing was acquired, located in three homes on Bridge Street: Marian Hall, Angela Hall and the Sehring Mansion. These added to the housing options in the south wing of the Motherhouse.

1953 – Sr. M. Elvira Bredel, OSF was named the college’s third president. The college inaugurated the Seraphic Institute of Theology (also known as the Franciscan Institute), conferring 205 certificates and 35 Master of Arts degrees in Theology over its 12 years. The School of Nursing was also accredited by the National League for Nursing.

1957 – The first Caritas fundraiser gala was hosted at St. Francis to raise money for student scholarships.

1965 – The Sisters marked a century of progress in education in the evolution of the College of St Francis.

1968 – The new library opened with books that were moved from the college wing of the Motherhouse.

1969 – Dr. Francis Kerins was appointed as the college’s fifth (and first lay) president.

1970 – Merger talks began with Lewis University in the hopes to establish a south and north campus of the potential “Lewis-St. Francis of Illinois.” (The merger ended in May 1972 when Lewis trustees could not agree on naming the new institution’s president.)

1970 – A Bachelor of Science degree program in Health Arts began.

1970 – A three-year degree program was initiated.

1972– Men’s intercollegiate athletics were established. Elmer Bell became the first full-time athletic director and CSF started its first athletic programs – baseball and men’s basketball. Both teams employed the nickname “The Falcons.” The first male students were admitted to the School of Nursing.

1976 – Women’s sports resurrected. Women’s basketball, tennis and volleyball started at CSF along with men’s tennis programs. Cheerleading began as a student activity in 1976 with seven cheerleaders who cheered for the men’s basketball team, forming the CSF Spiritline.

1979 – Men’s golf and softball were added to CSF’s growing list of sports.

1980 – CSF gained graduate degree-granting authority and a master’s program in health services administration was offered. In the 1960s, a master’s degree in Franciscan Studies was offered.

1980 – CSF pushed to grow African American student representation, as reflected in the demographics of the local community.

1986 – A recreation center was constructed for the athletic program and the men’s football program was created. Tower Hall was deeded to CSF.

1987 – The School of Nursing approved to award a Bachelor of Science degree in Nursing (BSN) and changed its name to Saint Joseph College of Nursing (SJCN), with Lois Benich serving as its first president. Since 1920, 1,860 students graduated from the SJCN diploma program. Cheerleading became another CSF intercollegiate sport.

1993 – The Moser Performing Arts Center was built as an addition to Tower Hall.

2000 – USF pushed to grow Latino/a student representation, as reflected in the demographics of the local community.

2000 – Teacher education programs are separated from the College of Arts & Sciences to establish a College of Education. Restructuring creates this college with the College of Health Arts, Graduate & Professional Studies, College of Nursing & Allied Health, and College of Undergraduate Programs.

2000 – A physical campus and programs were added in Albuquerque, New Mexico for a newly created Physician Assistant program, and 40 acres were purchased in Joliet on Ridge Road for possible future expansion. Graduate nursing education program begins for advanced practice nurses with tracks as clinical nurse specialist or nurse practitioner.

2003 – The historic Motherhouse building and adjacent land was acquired by the university from the Sisters of St. Francis of Mary Immaculate.

2003 – A new mission statement was adopted by the Board of Trustees.

2004 – USF became the property owner of 17 acres on Wilcox and Taylor Street.

2005 – The Joliet Symphony Orchestra at USF was established.

2007 – The City of Joliet erected the Mother Alfred Moes statue in the roundabout in front of Tower Hall, to honor of the Sisters of St. Francis of Mary Immaculate.

2008 – College of Education programs were accredited by the National Council for Accreditation of Teacher Education (NCATE).

2008 – The College of Nursing, which moved from the Saint Joseph Medical Center complex to the newly acquired and remodeled south wing of the Motherhouse.

2009 – The south wing of the Motherhouse was renamed Donovan Hall.

2009 – An agreement with the Veterans Administration was developed, and USF became a “Military Friendly School.”

2010 – The Welcome Center opened in the Motherhouse.

2010 – USF dedicated the campus as a peace site and ritualized it with the placement of a peace pole on the Quad.

2011 – The nursing college was re-named “Cecily and John Leach College of Nursing” and the library was named “LaVerne & Dorothy Brown Library.”

2011 – The Doctor of Education program was established.

2012 – The recreation center was renamed the “Pat Sullivan Center” in recognition of Sullivan, a longtime basketball coach and athletic director.

2012 – The Board of Trustees approved a Sustainability Statement on February 9.

2013 – The university’s first overseas MBA program was established with Brno University of Technology in the Czech Republic.

2014 – The “St. Bonaventure Campus” opened in downtown Joliet with the added dedication of the Robert W. Plaster Center in Joliet’s old Mode Theatre building. The Business Incubator opens on the first floor.

2014 – The Alumni Center and Alumni Gathering Room were dedicated in the Motherhouse.

2016 – Guardian Angel Hall opened to students at St. Clare Campus, located at 1550 Plainfield Road. It became the new home of the Leach College of Nursing, and the College of Education moved into the nursing college’s former Donovan Hall location.

2017 – The USF women’s bowling team won the NAIA Invitational in its fourth season of competition.

2020 – Centennial celebrations began at the University of St. Francis to celebrate 100 years of Catholic, Franciscan education.

Stories from the Archives

Quick links to these online resources are found below:

One major component of the university’s centennial celebration in 2020 has been the rebranding of the university’s three annual Engaging Mind & Spirit magazines for stakeholders into a special trilogy of publications which focuses on both the history and future of the institution. Each issue contains a new installment of the university’s history (written by Dr. David Veenstra, associate professor of history at USF), resulting in a three-part feature story. Starting with the Sisters’ work in the Joliet and regional communities, and continuing through World War II, the Great Depression, and other significant historic events, the story leads up to the university as we know it today. Below, left to right, are the three centennial magazines that were issued in spring, summer and fall of 2020. Click each one to read! 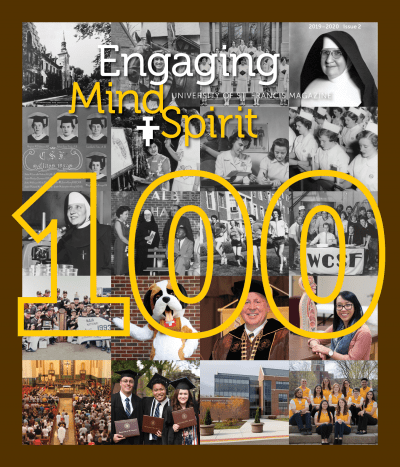 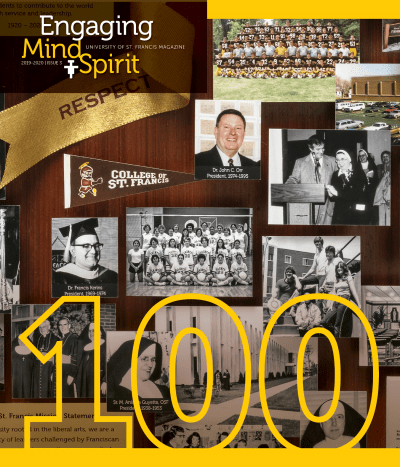 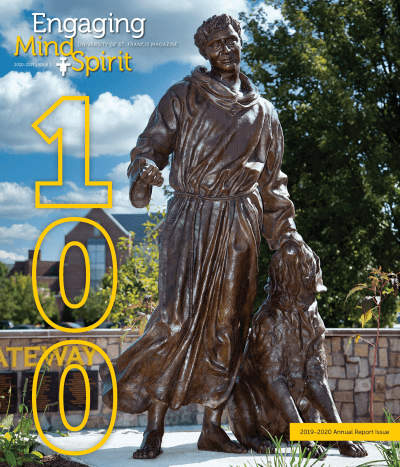 To recognize and celebrate USF’s centennial, special decade-themed banners were placed across our Joliet campuses for all of 2020. Images of the banners were also shared in the monthly centennial e-newsletters. For a closer look at the banners, click on the thumbnail images below.

This collage, a visual history of the University of St. Francis in Joliet, Illinois,
celebrates 100 years of undergraduate and graduate education. The collage was created to commemorate
the university’s centennial in 2020, and will have a prominent, permanent home in Tower Hall at USF’s main campus.